Welcome to our newest team member, Joe. Joe has a background in a bunch of different motor sports from dirt bike racing to circle track racing. I look forward to the help and knowledge he brings to the team.


I was again unable to get the diff fill bolt off. I think I'll weld a bolt head to it so I can get a socket on it and try again. Do we really need to change the diff oil? Probably not, but it's good preventative maintenance. 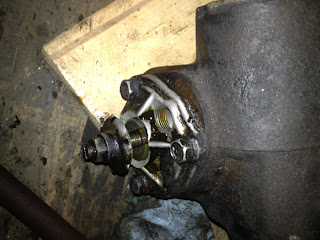 The last project of the night was the most exciting. We started on the JY motor. The hardest part was jacking it up to get it on the engine stand. We didn't have a lift, so we jacked the pallet up, put it on jack stands, then jacked the engine up off the pallet. After it was secure, we started pulling it apart. The combustion chambers looked good with no scoring. There's a lot of carbon build up, but we'll clean that out. The valves looked good with the requisite carbon build up. The head gasket was good. There was no water or metal in the oil pan. We're going to clean it up and put it back together with new gaskets. 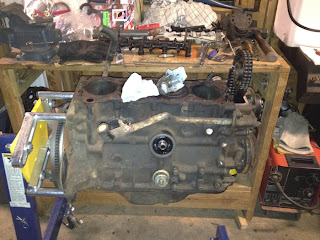 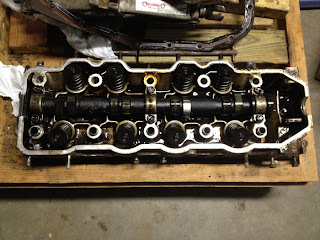 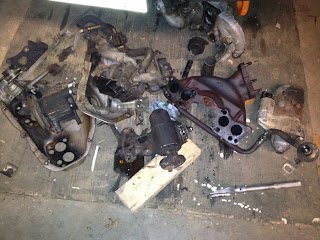 Forrest joined us on Wednesday to help work on the car. He brought along a piece of metal to cover the sunroof opening and installed it with 4 temporary screws. This should be enough to keep the rain out.

We pulled the 2nd engine out of storage and tried to fire it on the pallet. It was quite a kludge with the distributor from the good engine, the old carb and jumper cables, battery booster and various other wires running between the 2 engines. It turned over, but we couldn't get it to start. We discovered the 4the spark plug hole is "blocked". We got the plugs out to look at them and that one did not go all the way back in.

I ordered a gasket kit from Rock Auto. We'll put the 2nd engine on the stand and tear it down and refresh all the gaskets. We'll take care of the spark plug threads at that time.
Posted by clowntrigger at 12:42 PM No comments:

At last Wed’s work session, we discovered the battery was the source for all our ailments. The original used battery we were using had run it’s life and was replaced by the one from the BMW a few weeks back. Well, the BMW battery is just over 5yrs old and, apparently, has run its life too. We were able to get the car started with a jump and hooned it gently around the neighborhood. At this point it’s cage, cage, cage and remaining stuff. The cage is the biggie, but we have a timing cover oil leak that needs to be addressed. We’re going to handle that by starting the spare engine and seeing if it’s solid. If so, put it in the Celi and pull the other to rebuild. Or rebuild the spare, then swap and rebuild the original.

Tonight, I took the car out to return Ken's tow dolly. Yes, it has a hitch on it. I had to replace the 1.5" ball with a 2" ball I had sitting around. It pulled the trailer just fine. I blew the instrument light fuse less than 5 minutes after starting out. I did have my gps running, so I had a speedometer.

The temperature did great on the JY aluminum radiator with no fans. It did creep up at one extended stop. The oil pressure gauge ran on the High side when driving, but it was smack dab in the middle at idle. I found out that if you try to add oil when the car is running, it will blow out all over the engine. So, I added some patina to the engine tonight.

The steering is still wobbly. Yeah, not scary at all, just wobbly. Brakes are good. Overall, it was an acceptable drive.
Posted by clowntrigger at 9:15 PM No comments:

Earlier today, I picked up some relays, an overflow hose and a coil at LKQ today. I’m not sure I’ll have time to wire up the relays and a switch, but one fan is mounted. I also picked up some threaded rod, stand-offs and nuts from AAA for the bottom radiator mount.

I mounted the radiator and the other fan. The wiring still needs to be done and I'll get some wire before next Wed so we can finish that.

I tried to start the car and was semi-successful. At first, it wouldn’t start. Then it caught and ran like it was starved for fuel. I checked the fuel filter and it was full. I was able to get it started 3 times this way, but that was it. The charger/booster is on the battery. I checked the coil and it is within spec. The wires are all correct on the HEI module. Ground it there and good. I’m not sure what keeps happening.

Posted by clowntrigger at 4:36 PM No comments:

I went out to start the car some time last week and it was not working again. The first thing we tackled on Wed was the spark problem. All connections were correct. We swapped HEI modules, but no luck. I tested the coil and it was not within parameters, so we replaced it. That resolved the problem. It started up and ran much better than last time. It bogged down while accelerating up the driveway, but I had no more problems with it.We drove it around the block a few times to see how it was doing and it was much improved. There's still no power, but it is a 30 year old car. The car had 110 hp new. I'm guessing we're at 60-75 hp. Luckily, we have a spare engine that we plan on rebuilding and swapping for more power/reliability, but that's all time and money dependent.

We also swapped in the aluminum junk yard radiator. We ran the car without fans. It didn't overheat when moving, but the temp would climb while sitting.

Today, I hauled the old Datsun 620 truck to the scrap yard. It was loaded down with all the spare metal I could find just to make it worth their while and to clean up the garage. It's kinda sad seeing it go, but it wasn't doing me any good just sitting there. I kept some stuff to sell. If it doesn't sell in the next month, I'll just junk it too. Before I dropped it off the dolly, I pulled the 4 headlights. They are all halogen. I've installed them on the Celi for a free light upgrade.

I returned the wheels we bought 2 weeks ago. They wouldn't take my steelies for a core return, so the aluminum wheels went back. That's $210 saved. I'll check CL and see if I can find a set of 15" wheels for less.

I'm starting to see the light at the end of the tunnel, but there's still a bunch to do. One thing at a time and it will get done.


Posted by clowntrigger at 6:55 PM No comments:

Wednesday's work session started out like normal. I cleaned up all the grounds in the hope that would fix the spark issue, but to no avail. Ed and Dom showed up, so we pulled the rear shocks and put the Frenchy ones from the Camaro on. It helps some, but the springs are just shot and they need to be replaced. It is an improvement though.

About that time Ken showed up. We started troubleshooting the spark issue and his eagle eyes noticed a difference in the mounting holes in the HEI module. One hole had more metal around it and it went into the module. This, apparently, is the actual ground. Once we moved the ground connection to it, the engine fired up. So to review, there are 2 mounting holes on the HEI module. One is ground, the other is not.

I'm happy the car is running again. We have better shocks and the cage is almost all done.

I'll be in Charlotte on Monday and will stop by the pull a part. I'll see if I can pick up some rims, an aluminum radiator with electric fans and a 3rd brake light for mounting on the roof.
Posted by clowntrigger at 7:50 AM No comments:

The crew met at the local self service JY this morning. Ken came along to supervise and offer wheel advise. We were looking for 4 things: coil with ignition control module, rear shocks from a Camaro, a radiator and 15" wheels. We did not find the coil and ignition module.

We found 2 sets of shocks. The first was hydraulic and had no return. It was stiff on the compression though. The second set we found were gas and had good compression and return. They look fancy, but really, they were from a Camaro! 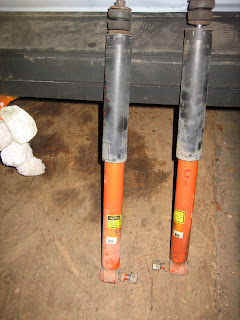 Even better, they were made in France! 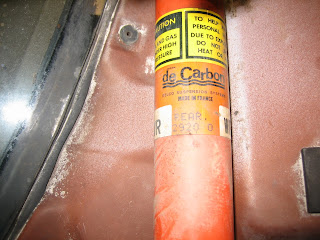 We did pull an aluminum radiator with 2 fans out of a Nissan. 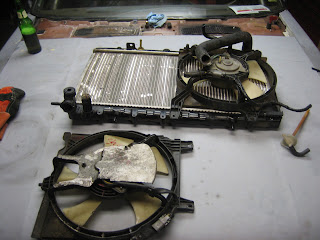 We also found some descent 15x6 wheels from another completely unrelated Nissan. They are aluminum wheels with crappy, dry rotted tires. They made me purchase the tires as I had no way to pull them off. 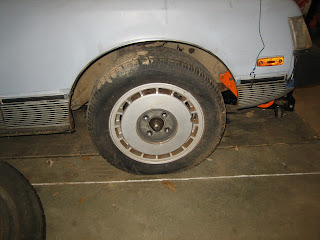 They do rub the shock tower, so we'll need spacers. 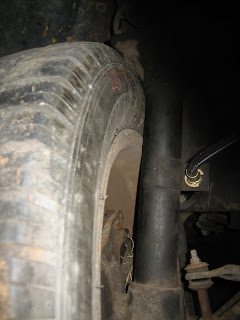 And we'll need longer studs, you know, so the lug nuts don't fall off and let the wheel have it's freedom. 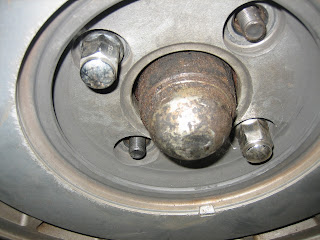 The spacers will also help with keeping the wheel away from the rest of the car during heavy loads. This is fully turned in while on the ground. There is just barely enough space to put my littlest finger between them. 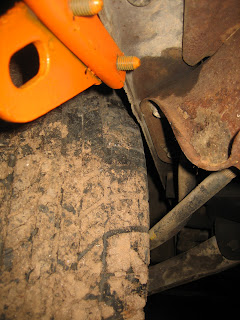 And for Ed, just because. These are from a Saab 900 turbo. The offset it too large and would require longer studs but no spacers. They are 15" wheels and the tires are skinny enough that they don't rub the shocks. 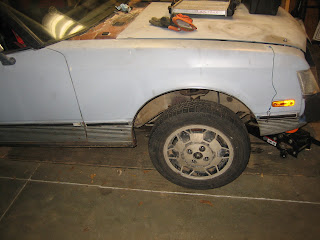 Since there is plenty of space in the wheel wells, I'm going to investigate 16" wheels. This will allow us even more tires choices. Hopefully it won't cause an issue with rubbing, but we'll figure that out if it does.
Posted by clowntrigger at 8:21 PM No comments: